This is his Remembrance Sunday sermon, shared via the Quaker committee for Christian and interfaith relations.

A year or so ago I made one of my regular visits to Penang, in Malaysia. It coincided with the day when Chinese family members travelled from around the world to meet together at a clan temple. They met to remember and pray for their ancestors, in front of tablets with their names. The temple priest leads the prayers and singing, rather as we do this morning at the memorial to those from this parish who lost their lives in the world wars.

The First World War affected every community in these islands. A spontaneous reaction was to do something tangible to mark the immense loss of life by erecting a memorial, and these remain, often with so many names from quite tiny communities a permanent reminder of the huge loss of life.

Memorials then became more comprehensive. The whole nation had suffered loss in war, and those who had served in the armed forces were remembered at the national cenotaph with thanksgiving. It was an expression of our national identity.

At the same time people asked where God was in all this. Most did not answer the question by blaming God for the loss of life, but recognised the war was triggered by the leaders who had led their people into war, as has happened since the beginning of time.

And finally people asked how they could remember the dead. The memorials had been built but there was an ongoing sense of loss for so many families. Commending the departed into God’s hands – as was done in the burial service – was a help, but the continual memory of them by lighting candles and praying that God would keep them in his light became much more common.

Prayers for the dead had been disapproved of because people said when someone has died we can have no further influence on how God cares for them. This seems to seriously misunderstand what prayer is.

The Anglican Roman Catholic Commission declared ‘In Christ all the faithful, both living and departed, are bound together in a communion of prayer.’ We are one with all those God loves, as we keep alive our memories of the departed we are together with them in God’s love.

We can never expect to change the eternal changelessness of God, but rather we can hold people, living or departed, before God, and as Quakers say, we can hold them in his light. To hold someone in the light is to seek, through prayer, to bring that person fully into the mysterious presence of God.

I hold persons up before God in intercession, loving them and seeing them with God, I visualize them wrapped in an actual warm light, which represents God’s love.

My mind sees a light and I know that God is, and will be, caring for that person.

This year Remembrance Sunday falls one hundred years after the introduction of conscription, and the Battle of the Somme. As poppies are seen around this morning, and worn by some, they call us to hold in the light those who died. 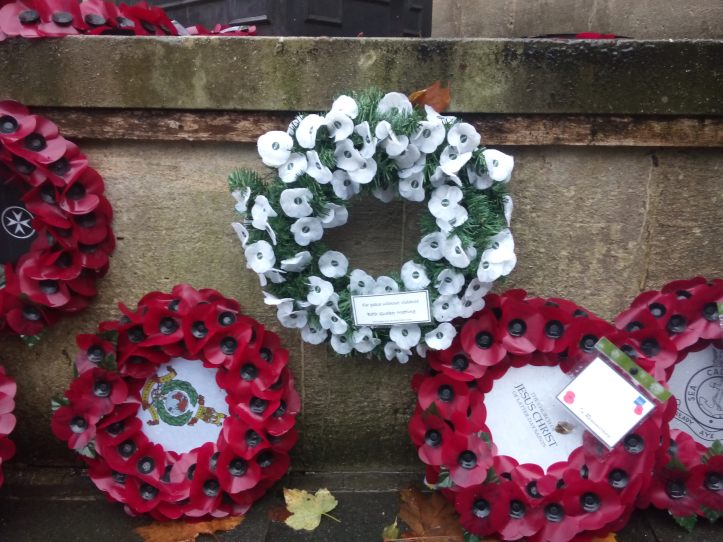 Friends laid a wreath at the Bath Cenotaph “for peace without violence”.

Perhaps the best way we can remember those who have given their lives in so many ways to the service of their country, and in the cause of working for peace and justice, is for us to receive the free gift of the peace of God which passes all understanding. As we share the peace, and then later come to the altar, we re-affirm that we seek to live in peace with God and all people.

I conclude with some prayerful thoughts. There is now an Edith Cavell memorial in Inverness with her words:

“This I would say, standing as I do in view of God and eternity, I realise that patriotism is not enough I must have no hatred or bitterness towards anyone.”

Quakers there used these words at the memorial at Remembrance time:

We come together today
To remember all those over the world who have died in war or because of war,
The tortured, the innocent, the starving, the exiled, the imprisoned, the oppressed and the disappeared.
We pray that we may became true makers of peace.
May we see the people of the world as our brothers and sisters, as one community.
As we pray for the day when war is abolished

From St Ignatius of Loyola:

Welcome, Lord, into your calm and peaceful kingdom those who, out of this present life, have departed to be with you; grant them rest and give them the life that knows not age, the reward that passes not away.

And finally from the Quaker, William Penn:

We give back to you, O God, those whom you gave to us. You did not lose them when you gave them to us, and we do not lose them by their return to you. Your dear Son has taught us that life is eternal and love cannot die. Open our eyes to see more clearly, O Lord of life and death. Amen