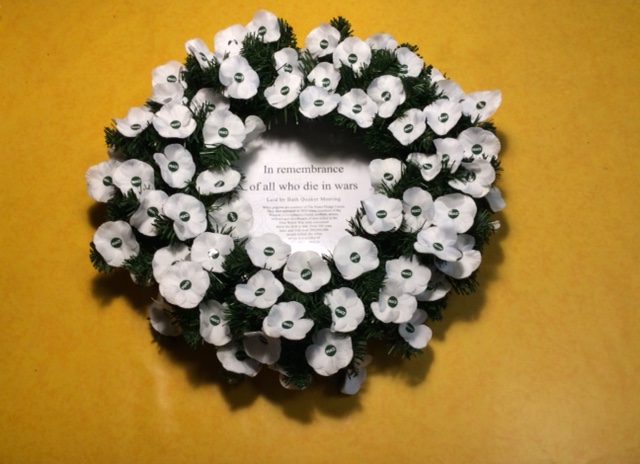 This beautiful white poppy wreath will be respectfully laid alongside numerous red poppy wreaths at the ceremony at Bath Cenotaph 12 November 2017.

Bath Quakers are once again invited to take part in Bath’s Remembrance Day ceremony at the War Memorial in Royal Victoria Park on 12 Nov by the organising civic and military  authorities. By prior agreement, two Friends will respectfully lay a white poppy wreath to recall all those who have died in wars (both military and civilian) and in hope of peaceful resolution to future conflicts.

In remembrance of all who die in wars. Laid by Bath Quaker Meeting. White poppies are courtesy of The Peace Pledge Union. They first appeared in 1933 when members of the Women’s Co-operative Guild, mothers, sisters, widows and sweethearts of men killed in the First World War were concerned about the drift to war. Over 300 wars later, and with over 200,000,000 people killed, the white poppy is a symbol of grief and the need to work for peace.

Please look out for our beautiful white poppy wreath and – if possible – spend a moment of silent reflection. Do share with us any reflections or questions (via comments, or via twitter to @BathQuakers).

Last year’s wreath in 2016 carried the text For peace without violence. It was stolen some two weeks after the ceremony. A similar thing happened in 2015 when the white poppy wreath was first cast aside and then stolen and disposed of.

Bath is notably more accommodating of the white poppy and its message of peace than some other cities. The Derbyshire Times reported on 2 Nov that white poppies were ‘banned’ from the Chesterfield Remembrance service.