Editor’s note: Rowan Williams asks in his book Being human:

What is your attitude to silence? What are the positive and humanly constructive ways in which you might use it? Why do think some people find that practising silence or contemplative prayer helps them to draw closer to God?

Two Bath Quakers considered the quetion “Why Silence” in our evening conversations earlier this year. The first reflection can be found here; here’s the second. 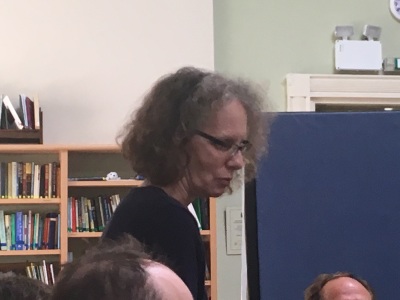 I am writing this from recall as I released all my notes to the universe via the paper recycling. It is interesting, of itself, to see what I choose to remember.
This was an evening where Margaret and I had agreed to share our thoughts as to why Quakers worship in silence and then to move into some shared group time.

Margaret started the evening and even as she spoke I was struck both by how similar some of the ground we covered was and yet how very different our angle of approach. It was a very positive experience for me. Margaret has a calm, clear voice and that is a treat in itself.

When my turn came to speak I began with reflecting that in fact it is not silence that I sit with but quietness; the cessation of speech. I turned to the dictionary for some definitions. Silence means the absence of any sound and in fact our brains do not like to feel disconnected from our environment. No sound, no light, no touch and total lack of sensory information are a form of torture.  Quietness is not the same. The word comes from Middle English where it was used to express peaceable options as opposed to conflict, and often in the military sense. Very Quaker; I knew I was onto something!

Having settled that I was dealing with quietness, I then reflected that this was neither new, nor restricted to Quaker worship. Quietness has been a core value for thousands of years across the great religions. The Hindu Bhagavad Gita, the great poem to the god Krishna honours it. The Zen Buddhist meditative practice and the Desert Fathers of the early Eastern Christian Church all understood its vital significance. It seems that Western Christianity became rather word-driven with text and liturgy. Mrs Moore, the character in EM Forster’s A Passage to India frames this as “poor little talkative Christianity” when she hears an echo in a cave and realises that all Christianity’s words amount to nothing more. This may all seem a bit harsh as some text and liturgy is beautiful but it makes a point.

Perhaps it is Quakers to the rescue with a return to some quiet or ‘silent’ worship for those that need that?

I think that perhaps at this point my talk may have gone a bit haywire for some as I ventured forth into some neuroanatomy and brain function. (To give this some context my last job, before retirement, was on a Stroke Unit, so I have some experience of brain function and dysfunction) The brain gives a lot of its motor space (ie the bit that generates movement) to our hands, mouths tongue and speech apparatus.  It is as though the brain itself sees this as very important. Think of a person shouting and waving their hands. This can be represented in a homunculus or little man image, which I brought along. But this motor space is quite a small part of the whole brain, so what exactly is the rest doing? Well, quite a lot is about taking in sensory information, touch, vision, hearing and processing that. Yet, even so, there is a very large amount of space in which we really don’t know exactly what happens.  I think it is to this space that I go when I turn off my speech and listening and moving and quieten those endless thoughts that feed the restless cycle. It is in this space that I may meet God and sometimes even be aware of it. I live in hope. I suppose this is my Garden of Eden space where I might meet God, if I can just be present in it, with all the busy distractions quietened.

So, this is my reasoning for “Why Silence?”. I know it is nothing new and has been much discussed before but I am grateful for the opportunity to have made myself think about it in order to share that with others. Margaret brought some wonderful passages to read; I will conclude with some lines from the Bhagavad Gita.

In this quietness
Falls down the burden of all my sorrows,
For when the heart has found quietness
Wisdom has also found peace.

This is etched into the window of the chapel in Dorothy House, Winsley. A wise and compassionate choice for those that find themselves reading it, in silence.