The sculptor and stonemason Laurence Tindall, a Bath Quaker, writes:

Having heard that I have had a little experience with war memorials the editor suggested that I write these short reflections in three parts for Bath Quaker News as we approach armistice day and the 100th anniversary of the end of World War One.

I have to tell you that my own efforts as an artist have received very little favour in this arena over the years. I have run into some pretty hot water on occasion. But I have also felt very privileged to be able to conserve some memorials for the families and communities that value them highly.

As a nation we prefer our public art and our monuments to be as undemonstrative, even as bland as possible. We are not a nation of extroverts and tend towards evasiveness and self depreciation in nearly all things. Even our greatest heroes are buried in the common graveyard next to Joe Bloggs and Edna Nobody, and so it is with war memorials. These will be neutered of all the reality of warfare let alone the emotional turmoil of depicting the extended collateral damage that engulfs civil society during these events.

This is immediately problematic for anyone who wants to ask those awkward and rude questions about what actually happened. You know – the stuff the soldiers don’t want to talk about when they get home; the stuff that makes them cry and wake up with night terrors. Not that I am asking every war memorial to look like Picasso’s Guernica although it is a very good war memorial and now stands in a specially made gallery in Madrid as a symbol of pain and reconciliation.

Any good artist will want to engage with the emotional content of any subject and Picasso was a good artist. In contrast it is strange how emotion is allowed in holocaust memorials. One of the best is the Judenplatz Holocaust Memorial in Vienna by Rachel Whiteread. It’s an inside out library of a few thousand terminated stories. 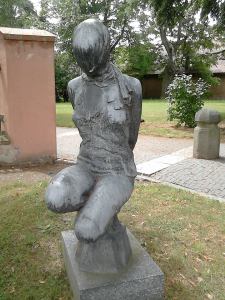 Even at Theresienstadt in the Czech Republic a figure of a young woman with a bag over her head tells you all you need to know about that place.

Why when we represent our war story do we have an angel and a couple of sentries in starched uniform standing with rifles pointed at the ground?

In his next article Laurence Tindall gets into some more awkward questions about war memorials.