Join the Roots of Resistance to the UK arms fair

I have volunteered to be an area organiser for Roots of Resistance and I need your support.

Roots of Resistance is a grassroots network of Quakers aiming to build a creative, vibrant and radical response to the Defence & Security Equipment International (DSEI) arms fair which will take place in London next September. 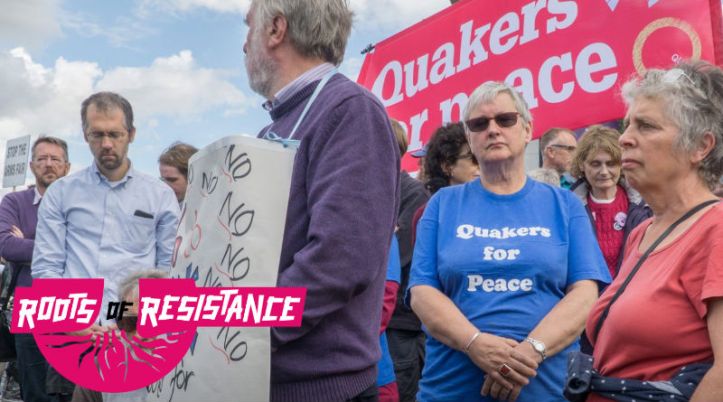 Taking place in east London every two years, DSEI is a huge trade show bringing together 1,500 arms companies with representatives from around the world. Some of the world’s largest companies market tanks, planes, drones, rifles, ammunition, surveillance technology, training and a huge array of other weapons. DSEI is next due to take place in September 2019 – and we’ll be there to get in the way.

At the last DSEI arms fair in 2017 there were at least 250 Quakers there through the week taking part in peaceful arrestable and non arrestable protest, both inside and outside the gates of the arms fair. One of the largest meeting for worships in the UK that year, outside of yearly meeting sessions, was held at the gates of the arms fair. Around 10 Quakers were also arrested, with many more who risked arrest by blocking the road.

The purpose of Roots of Resistance is to mobilise Quakers to gather in larger numbers at the 2019 DSEI, be more coordinated and effective in witnessing to our long held commitment, as Quakers, to peace.

What you can do now: