Laurence Tindall: my favourite memorial and a cross in the woods

The penultimate in Laurence Tindall’s series of articles on war memorials and commemoration.

This is my favourite war memorial. It is in the heart of Derby and shows the real cost of war. 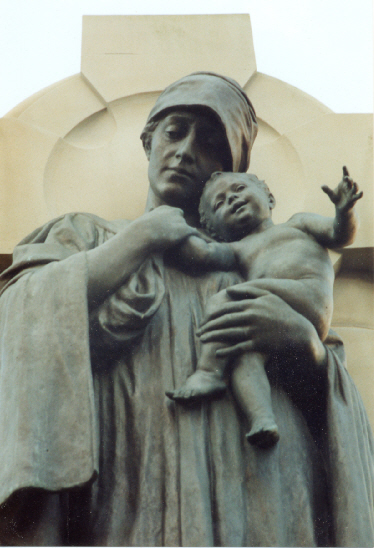 This First World War memorial simply shows a bereaved widow and her son who will never know his father; enough said. What a brave piece of commissioning and what a fine piece of work by A.G. Walker RA 1861-1939 famous for the equestrian statue of John Wesley in Bristol and the Garnett war memorial at Backwell (of which more later).

What I like about this is its completeness: the simplicity of the story and the absolute emphasis on love. The love between the mother and child mirrors the love between Christ and us. It draws us into the centre of Christ’s message: this world is redeemed not through war and transgression but through sacrificial love. Whatever we feel about war and the taking of life we should not forget that some people also believe that the laying down of their life is an act of sacrificial love and this can also be read into the art work. The father has died to save his family from tyranny. I know that some will find this far-fetched but I can assure you that my father was fighting for this in the second world war.

Our family, in the run up to the war, was comprised of communists and socialists who had been tirelessly campaigning for, and sending aid to Spain, and also opposing all the fascist demos of Oswald Mosley. They had a high profile and would have been rounded up and sent to camps along with all the Jews, the homosexuals and the disabled had Hitler won. Dad was not a Christian but he was fighting most definitely for his family. I don’t think he was innocent enough to believe that he was fighting for peace; he knew enough about the world, even though he was only twenty two years old, to know the fighting would go on but I do think that many soldiers believe they are fighting to protect their country and for peace.

In 2007 Major Rikki Peters asked me to submit a design for a memorial at the Royal British Legion respite home at Weston-Super-Mare. I suggested a poppy held in a woman’s hands. I was surprised, and more than a little pleased, that such a tender image had been chosen. I visited the home and spoke to the staff and servicemen. Among the bluff gallows humour – “We fought so that they would give their lives for their country” – there was a lovely caring atmosphere among the residents and the staff. 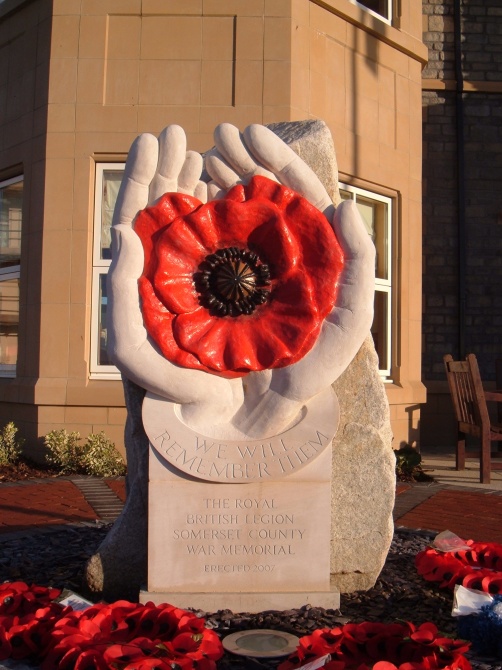 My sculpture is certainly not great art, nowhere near, but it is remarkable that it was chosen by the Royal British Legion to represent their genuine feelings of love towards these men and women who had fought to keep these islands safe.

The crucifix in the woods

In 1996 I was asked to find a life size crucifix in Backwell woods. After quartering the forest for an hour I almost walked into it, so hidden it was in the dense undergrowth. To my surprise it was so emotionally charged I stood in wonder looking at it. 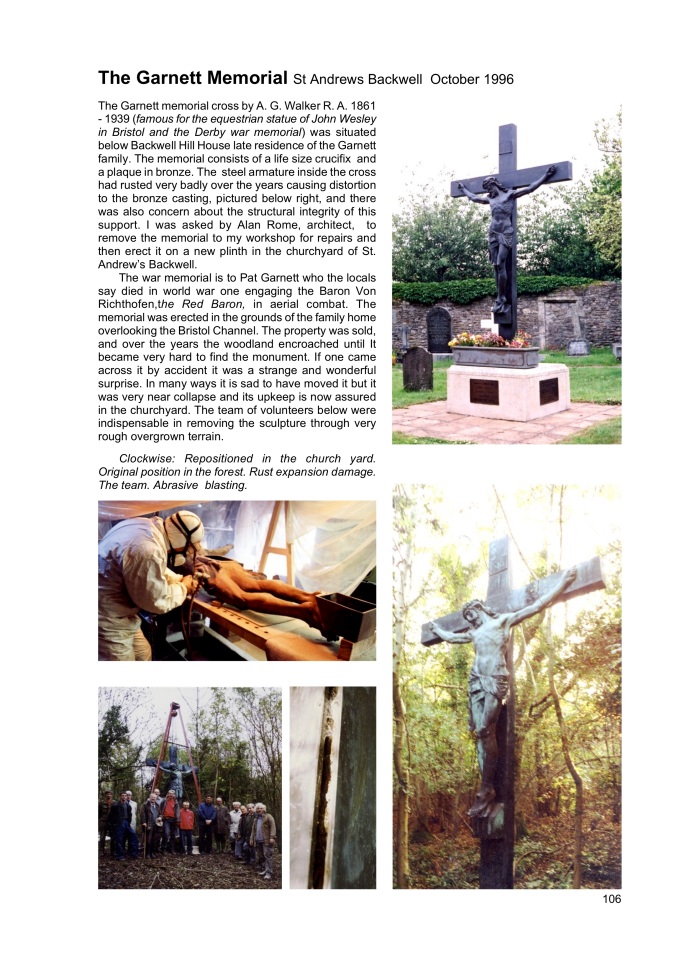 The crucifix made by A. G. Walker, re Derby, was erected after the First World War by the Garnett family as a memorial to their son Pat, a pilot who was shot down by the squadron of Baron Von Richthofen, The Red Baron. Originally it had stood in clear ground overlooking the Severn estuary but now, like Princess Aurora, it was guarded by brambles and thorns in a dense thicket. It spoke to me of loss, abandonment and heartbreaking secrets. It was in a bad state of repair; made of durable bronze but supported by a mild steel armature rusted to within a millimetre or two of its life; literally a few more months and it would have collapsed.

The woodland was now a separate commercial enterprise and the family no longer lived in the big house. I was asked to set the crucifix up in Backwell church yard with a new armature in stainless steel and a new plinth. It was sad but necessary to move the sculpture from such an enchanted setting but in doing so I was so privileged to care for the work of a brilliant sculptor, I had the chance of serving the people of Backwell by preserving part of their history and by ensuring the continuing life of their memorial and I was also serving a family who had lost a son and a wife who had lost her husband only weeks after their marriage.

In his next and final piece in this series Laurence Tindall sums up his feelings on on war memorials, and gives his explanation about why Bath Quakers’ white poppy wreath goes missing every year.