Book review: King of the Barbareens

The Neglected Books Page, a book blog by an American ex pat with exceptionally interesting tastes in reading, posts book reviews of some truly obscure and overlooked authors and novels.

This week Brad has been reading The King of the Barbareens by Janet Hitchman, a memoir of her life surviving the early 20th-century English care system. Hitchman became an Attender, if not a Friend, at a Norfolk Local Meeting, and is best known now for writing the first biographies of Dr Barnado and Dorothy L Sayers. Friends will find her descriptions of care homes and orphanages a compelling record.’ 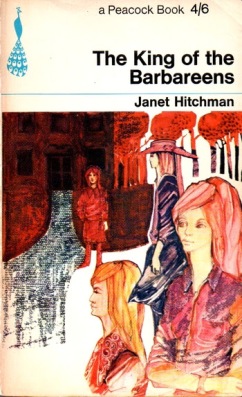 The King of the Barbareens is a memoir of a childhood spent as a bit of flotsam tossed about in the social welfare system that existed in England in the early part of the 20th century. Apart from an impression of watching an Armistice parade at the age of two, Janet Hitchman’s first memories are of living with Gran and Granfer Sparkes in their little house at the end of the “loke” in a village outside Norfolk.

“Another one of your grandchildren, Mrs. Sparkes,” people would ask when seeing the child for the first time. “No, no relation of mine. None whatever. She slept in a tiny old cot next to Gran and Granfer’s bed, with no bed clothes and just a piece of flannel for warmth. All she knew was that Gran Sparkes had promised her dying mother that the child could stay with her.

Elsie May Fields — the name Janet Hitchman found on her birth certificate — had been born in July 1916 to Margaret Ames, a seamstress. Her father’s name was left blank. On the back was penciled “Frederick Burrows, deceased 27.9.1916.” Doing a little digging on a genealogical site, I learned one reason why little Elsie was given up to the care of others. Burrows had been killed while serving on the Western Front. Her mother was a widow with two children and had clearly had an affair with Burrows several years after her husband’s death. What family Elsie might have had didn’t want to claim a soldier’s bastard as their own.

Over the next fifteen years, Elsie was carried along through an almost random series of arrangements. When a lump behind her ear was diagnosed as a mastoid, she was taken into a hospital where the treatment and recovery, in the days before antibiotics, was long and painful. Brought back to the Sparkes, she was quickly taken away again when a social worker decided the conditions in their home were too filthy for a child, and placed in the care of a widow:

As we sat at tea I brought forward a problem that had worried me since we met.

“What did you call Mrs. Everett?”

“Aunt Ada; but I’d rather call you Mummy.”

“Thass all right. I er bin called a thing or two in my time. Mum’s better than most of ’em.”

Then one day, when Elsie was about nine, Mum came in and said, “Elsie you’re going away tomorrow.” The girl was transferred to Gimingham Hall, where a Mrs Huntly and a small staff cared for a home full of elderly women, “all a bit ‘gone’ in the head.” As an adult, Hitchman concluded it was a private mental home and her transfer was probably a mistake. There were 25 “inmates,” several troubled teenage girls, and one other girl close to Elsie’s age. After her initial shock at seeing the women in the home rocking back and forth in their chairs or polishing a single piece of silver for hours on end, she accommodated to her new home. The inmates were gentle with her, Mrs Huntley a bit too concerned about heaven and hell but generally kind. The one thing that most disturbed her were the “pig-killing screams” that some of the women made when it came time to be bathed. “It will be all right,” one of the women on the staff told her. “It is only noise.”

“You mustn’t let it. It is only noise. You’ll hear worse and louder before you die.”

“There isn’t any worse noise that someone afraid.”

“All the noise of Hitler’s bombardment has not shaken me in this opinion,” Hitchman added.

Once again, the current picked up Elsie and carried her along to another foster home, and then to the Thomas Anguish Hospital School of Housecraft for Girls in Norwich, a charity home for teenage girls. Elsie found the home “a very happy place,” and the women in charge encouraged her to pursue her love for writing: “Once when turning out the box room Miss Hayhurst had unearthed a pile of obsolete hand bills, advertising some long-forgotten church bazaar. She met me on the landing and said: ‘Would you like these, Elsie: you can write on the backs.’ I have never in my life received a present that gave me so much pleasure.”

Despite, this, though, Elsie had a strong rebellious streak, and one day was called into the office and informed she would be moved to one of Dr. Barnardo’s homes. “‘Barnardo’s,’ I gasped, ‘but that’s a reformatory.’” The Barnardo Home outside Norwich she was sent to was, in fact, a very well-run and progressive institution for its time. “It ran like clockwork; it was magnificent,” Hitchman writes. “I loathed it.”

At thirteen, a veteran of a dozen different placements, Elsie was perhaps too independent a spirit to benefit from the safe, clean, and very efficient environment, which primarily aimed at rescuing children from the most desperate conditions of poverty and neglect. “At Barnardo’s drawing breath was our only freedom; and then it had to be drawn silently.” She was given free access to books and had time to find a quiet corner and read, and she devoured what the home could supply. It was then that Elsie decided to change her name to Janet after reading Jane Eyre. She would later write a biography of Dr. Thomas Barnardo, They Carried the Sword (1966).

After three years at Barnardo’s, Janet was taken to a boarding house in London to study for the civil service exam. The plan was for her to become a postal clerk. She rebelled again, however, and found herself, at the age of seventeen, fending for herself. She took a place in a hostel for young women and got a job in the shipping department at Debenham’. But the cost of room and board — meager to begin with — left her with almost nothing. She slept most of her time off sleeping: it was her cheapest option. “I suppose it sounds a shocking thing for a seventeen year-old girl to spend all her spare time asleep; but there it is; I was waiting for something to happen, enduring the dust and noise of the dispatch room in a kind of coma, until somebody noticed I was quietly dying.”

Fortunately, a move to another department, one with windows, and a raise in pay saved her, and she began to explore London — at least as much as she could with just three shillings a week in pocket money. She moved on from the store to a series of seamstress jobs and ended up, almost by accident, as the stage manager for a small but lively theater company. That led to meeting a young designer, Michael Hitchman, marriage, a child, divorce, and surviving unhappily as a domestic. “The great thing is not to be dependent on other people,” she writes near the end of the book, in what could stand as the orphan’s motto.

The King of the Barbareens leaves Hitchman at the age of forty. “Life has been much easier since I faced the fact that I am not a very nice or likeable person,” she writes. Religion, in the form of a Quaker community, has provided some consolation. And she has finally achieved her ambition of earning a living as a writer.

Hitchman went on to write for The Observer and other papers. She wrote a number of plays and radio productions for the BBC, the Barnardo biography, and in 1968 a novel, Meeting for Burial, based on several people she knew from the Quaker community in Norwich. Her best known book was Such a Strange Lady (1976), the first major biography of Dorothy Sayers, which received generally favorable reviews despite Hitchman’s not being given access to Sayers’ private papers. She died in Norwich in 1980.

“Time and again throughout my childhood,” Hitchman writes in her memoir, “I had heard people shrug off my orphan state with the words, ‘Well, what you’ve never had, you can’t miss.’ There was never a greater fallacy.” “I wanted relations, people I could call mine by right, not courtesy.” While rich in the variety of characters Hitchman recalls, The King of the Barbareens is a powerful account of what it’s like to be truly alone and powerless in the world.