In a joint letter to the Home Secretary, the leaders of five Churches including Quakers have expressed their concern at the Government’s announcement that it intends to suspend the programme for the safe re-settlement of unaccompanied minors seeking refuge in the United Kingdom. The text is below:

We are dismayed to hear, through the announcement from the Immigration Minister this week, of our Government’s intention to suspend its programme of resettling unaccompanied minors in March 2017. We urge the Government to reconsider this decision and to recognise the potential harm that this policy might cause.

Throughout the United Kingdom, our churches have sought to offer welcome and practical support to refugees and asylum seekers of all ages, often working in partnership with other faith and community groups. It is disappointing your consideration of provision is restricted to the perceived capacity of Local Authorities. This approach is devoid of ambition and lacks creativity. We would encourage an approach to refugee re-settlement that actively includes and engages those community groups and agencies, who offer the potential of raising our existing capacity.

There is compelling evidence that many young people have “disappeared” from temporary camps. If this disturbing trend is to be avoided in future, it is vital that they have the confidence to present themselves to the relevant authorities at their earliest opportunity. This will only happen if they know that in so doing, they will be cared for and given safe passage. The current policy announcement risks sending out a message that will further discourage this, and thus significantly increase the risk of harm to these children.

As the minister rightly asserted, the UK can be proud of its record in welcoming refugee children, which now extends back for over half a century. We believe that this should continue to be the case and would urge the abandonment of any policy that gives any impression to the contrary.

As a nation we have a rigorous approach to safeguarding, reflecting a strong commitment to the wellbeing of children and vulnerable citizens. We do not believe that this commitment should be limited by political borders.

We urge you therefore to adopt a policy that places the wellbeing and safety of children above every other consideration. Not only do we commend this as representing our own Christian values, but it is what we believe the overwhelming majority of UK citizens would believe to be right and just. 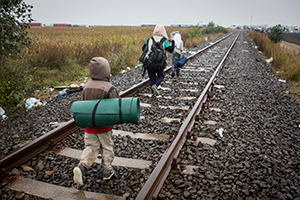 Image: Save the Children