As part of its programme of events on “Rethinking Security”, Bath Stop War is staging a performance of The Bundle by Journeymen Theatre at the Friends Meeting House, York Street at 7:30 pm on Saturday 8 July. 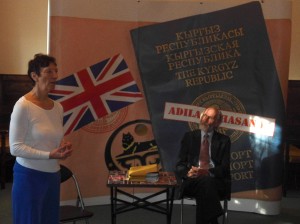 A scene from The Bundle by Journeymen Theatre.

Commissioned by Quakers Asylum-seekers and Refugee Network (QARN), The Bundle tells the real life story of Adilah, a Chechen woman who flees the persecution and violence of her society and immediate family to save herself and her children. Once in the UK, she continues to negotiate the harsh complexities of bureaucracy to attain refugee status.

In the “hostile environment” intentionally created by the Home Office under Theresa May, the play seeks to explore the life and culture that Adilah (not her real name) and her young family have left behind and the challenges that face them in the UK in 2017.

The title of the piece is taken from the name given to the Home Office file which is so vital to every asylum-seeker as it contains their life stories and the evidence of their claims. Journeymen Theatre have worked closely with the family themselves and with professionals who also work in the area of Asylum and Refugee issues to develop The Bundle.