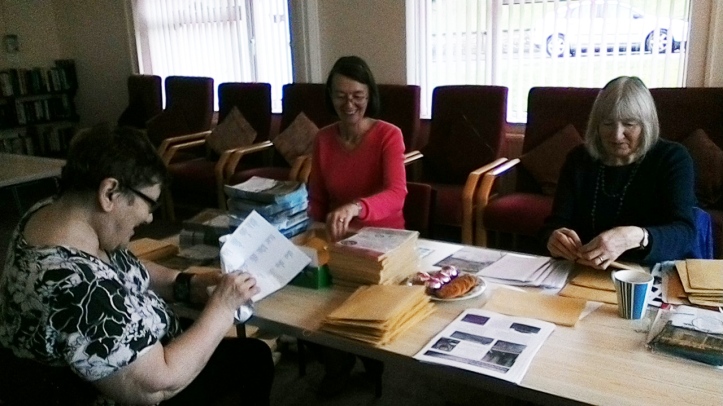 Friends stuffing envelopes (along with some with tea drinking and biscuit eating) for Bath Quakers’ Meeting House Appeal.

We are part way through the refurbishment of our meeting house and getting ready to set to work again. It has taken us six years to reach this point and we hope to arrive at the end well before another six years has elapsed. From Lin Patterson and Alison Packer, Clerks of Bath Local Meeting, October 2017

Sally Harris reminds us of the background context:

2012 The refurbishment started. We used our existing funds to put in central heating, buy new chairs, and pay for professional advice on what best to do at the east end of the building.

2013 The appeal was launched for £150,000. We raised £110,000 and started spending. First the meeting room was redecorated. We had bookcases made and moved the library into the meeting room. Then the serious work began.

2014 At the east end, contractors put in a platform lift to make the upper room accessible, installed a fully accessible toilet, and created a kitchen where the library used to be. At the west end, the internal stairwell and corridors above and below were redecorated as was the mezzanine loo. The stone staircase was cleaned and repaired. In the meeting room, the acoustic panels in the meeting room were renewed and a PA system installed.

We were glad to take a break when Yearly Meeting Gathering came to Bath in August. Visitors could see the refurbishment and we hosted a display of the Quaker Tapestry.

2015 By now, there was only £15,000 left in the appeal fund and we had not yet made the Meeting House more energy-efficient or more attractive from the outside.

We spent £1,400 on a conservation report on the façade and all of the remainder on employing specialist Heritage & Planning architects to come up with an energy-saving proposal suitable for a Grade 2 listed building. This was expensive but it paid off.

In December, Bath & NE Somerset Council gave permission for secondary glazing and draught proofing all of the windows, and adapting the west lobby and the lighting in the meeting room. The façade work should not present us with any planning difficulties, and will make the meeting house look cared for and more welcoming.

2016 Genesis Trust asked if they could move part of their operations into the basement. Discerning that we should go ahead, then sorting out the legal aspects and renovating the old flat took us the whole year. We took the opportunity of getting budget costs for the energy-saving work at the same time as costing the renovations to the flat.

2018/19 We hope to start with the façade conservation next spring. The energy-saving work on the windows, west lobby, and lighting will be complex but we hope to complete this by summer 2019.

NOW THAT YOU HAVE READ WHAT WE HAVE DONE AND PLAN TO DO, WE VERY MUCH HOPE YOU WILL CONSIDER MAKING A DONATION

You can also get them at the front of folders box in the meeting room or from Sally Harris.