Quaker week kicks off in Bath: Juliet Prager on why Quakers matter

This year’s national Quaker Week kicked off in Bath with a talk by Juliet Prager, deputy recording clerk of British Quakers. 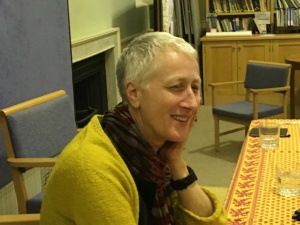 The national Quaker Week theme is “room for more”. Juliet spoke of her own generations of family half-Quaker and half not, of personal experiences of Quaker Meetings, and of the importance of Quakers as community. 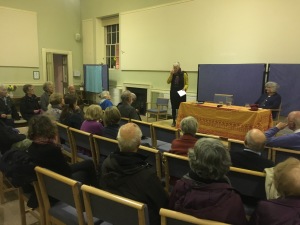 Speaking about the role of Quakers as a body in the world today she discussed three “tested concerns” and shared endeavours.

The first was about refugees and the work of the Quaker Asylum and Refugee Network QARN and the emergence of the Sanctuary Everywhere movement to challenge Britain’s immigration policies, and the trend of Quaker Meetings such as Bath to become Sanctuary Meetings.

The second was the long journey towards same sex marriage, from the 1963 publication of Towards a Quaker view of sex to the 2009 decision in York to celebrate marriage equality.

Her third example was the growing “meaningful but fun” Campaign against the arms trade (CAAT) protests at the DSEI arms fair. Last year the Art the Arms Fair event had sold a donated Banksy artwork and raised £230,000 for CAAT.

Her talk was followed by a lively question and answer session. Many thanks to Juliet for coming out west and getting Bath’s Quaker week off to a perfect start.