Bath Quakers and other visitors heard how Bath’s Muslims plan to combat Islamophobia and extremism with a greater openness, when we attended an open day and vigil at the Bath Mosque Sat 25 March. The event was held in the wake of the horrific Christchurch Mosque mass shooting in New Zealand. 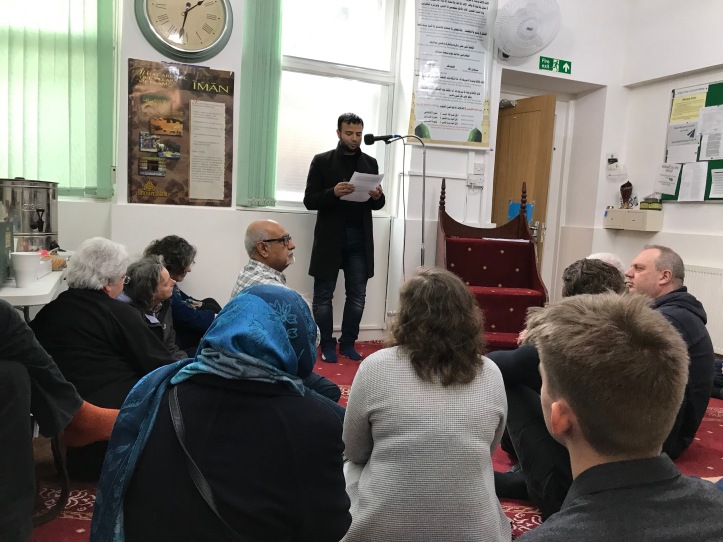 Imam Mohammed welcomes guests to the vigil in Bath Mosque.

The Imam and the Muslim faithful welcomed guests to 8 Pierrepont St with speeches, silent reflection, refreshments and a tour of the Mosque, which celebrates its 40th anniversary this year. Imam Mohammed teaches and is completing his PhD at SOAS in London. A distinguished academic from Cairo, he gave a very erudite talk at the Friends’ Meeting House last year. What Friends did not experience at that time was his highly accomplished sung recitation of the Holy Qu-ran. You can hear an example of his recitation below (chapter 42, verses 47-50) and there are several more examples here.

You can also hear below an exclusive preview of a 15-minute interview with Imam Mohammed conducted for Imperial Voice Radio, the new Bath radio station to be launched in Fairfield House on 4 May 2019.

The full text of Imam Mohammed’s talk at the vigil is below.

My name is Mohammed Gamal, the Imam of Bath Islamic Society.

I greet you all, originally motivated by the respect and love I keep within myself to each and every one of you. Your presence with us today is an embodiment of hope, human unity and solidarity irrespective of our different backgrounds, religions and ethnicities. I would like to  quote here the words of the archbishop of Canterbury, Justin Welby, who says commenting on the attack of the Christchurch mosque, while the attacker thought that he is waging a war against Islam, instead he has generated human unity. Given this, the support of the local Bathonian community sends a message of love, solidarity and compassion that are badly needed today.

My dear brothers and sisters, our gathering today functions at multiple dimensions:

To summarize and conclude, let these incidents be a force to unite the sons of Adam again after Satan has caused them to deviate and separate. Let us fight hate with love. Let us challenge fear with hope.

And on behalf of the Bath Muslim Community, I would like to invite Mr. Mayor to say a couple of words, followed by Reverent Philip, from St. Stephen’s church who will recite the beatitude to us, which will be followed by my recitation of some Qur’anic verses, at the end I would kindly ask you to join me in a five-minute silence and contemplation.