Susan Tomes alerts Friends to a free course which starts Monday next week. It’s one of the “massive open online courses” (MOOCs) run by FutureLearn, a project started in 2012 by the Open University and the BBC.

Delivered by Ben Pink Dandelion, this course is called Radical Spirituality: the Early History of the Quakers. 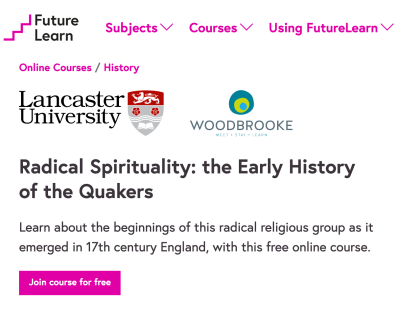 The FutureLearn free online course is in collaboration with Woodbroke and Lancaster University: click image for more information.

The course will take place online and will consist of a variety of elements. These include videos filmed in and around what is called ‘1652 country’, the area that Quakerism really took off as an organised mass movement. We visit the key sites of Pendle Hill, Firbank Fell and Swarthmoor Hall. Other videos look at the place of travel for early Quakers and the significance of the movement starting in the north of England.

We learn about the people, the places and the ideas associated with the start of Quakerism. There is text to reflect on and audio clips to help us ‘hear’ the writing more easily.

In Week 1 of the course we’ll reflect on the civil war context and provide an introduction to Quaker founder George Fox’s life.

There is still time to invite friends and colleagues to enrol on the courseand take part alongside you. Having the support of people you know can really enrich the experience of studying online.

There will be plenty of opportunity to interact with other learners within the course, which we strongly encourage. In the meantime, you can use the hashtag #FLquaker to find and contribute to any discussions on social networks.

Professor Dandelion, who is Professor of Quaker Studies at Lancaster University, delivered the Swarthmore lecture when Yearly Meeting Gathering came to Bath in 2014.